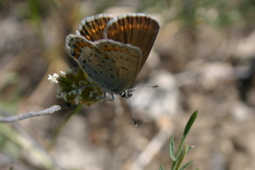 Spatial and temporal variation in the strength and nature of natural selection could help explain genetic diversity in natural populations and data on short term evolutionary responses to fluctuations in temperature and rainfall could facilitate predictions of climate change impacts. In 2012, we began a long term study of genome-wide molecular evolution in populations of Lycaeides idas in the Greater Yellowstone Ecosystem (GYE). In 2016, we used distance sampling to estimate population densities of 10 butterfly populations spread across the GYE in Wyoming and Montana. In parallel, we estimated host plant cover and conducted insect community surveys at each site. We also completed a genotyping-by-sequencing survey for eight populations sampled in 2013 and 2015 to estimate contemporary variance in effective population sizes. Based on 480 samples across sites, we found significant variation in population sizes (as estimated by distance sampling) among sites and years. Host plant abundance, climate, and insect communities varied among sites but were not consistently predictive of population size. Estimates of effective population sizes among sites showed pronounced variation that was uncorrelated with genetic diversity, possibly due to widespread fluctuating selection.